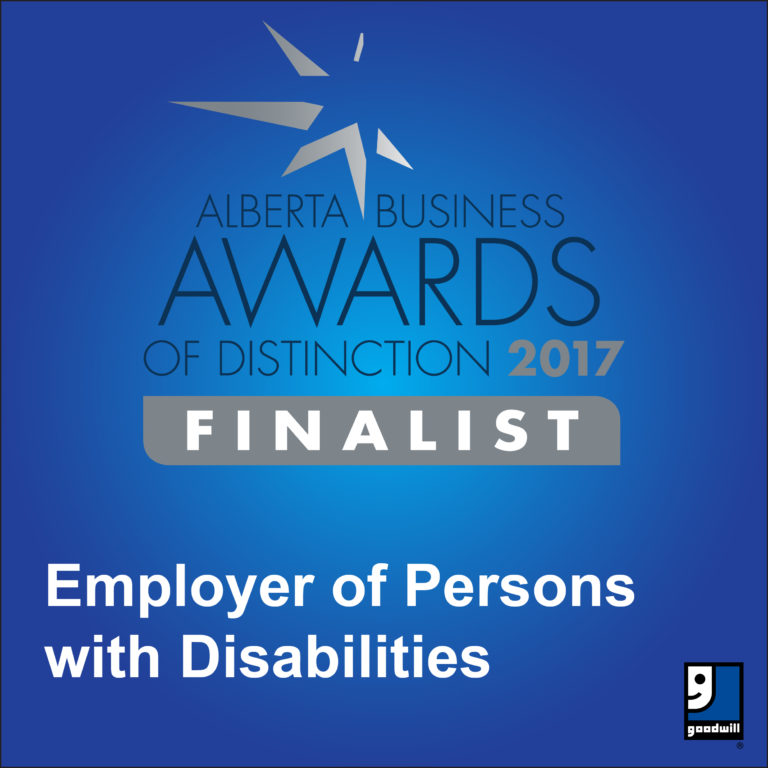 Edmonton, Alberta– Goodwill Industries of Alberta is pleased to announce our selection as a finalist for the 2017 Alberta Business Awards of Distinction in the Employer of Persons with Disabilities Award of Distinction. Finalists were announced Friday, December 16, 2016.

This recognition by the Alberta Chambers of Commerce is a great honour for our organization. Along with being a finalist for the Employer of Persons with Disabilities Award of Distinction, Goodwill Industries of Alberta is also eligible for the prestigious Premier’s Award of Distinction.

Goodwill Industries of Alberta has been affecting positive change, lives and communities here in Alberta for nearly 70 years. “We are one of Alberta’s largest employers of persons with disabilities; and further we job counsel, career develop and job place Albertans with disabilities into great jobs in the community. We are very grateful and excited to be recognized for such a distinguished award,” said Goodwill’s President and CEO Dale Monaghan.

The awards will be announced on February 24, 2017, at Renaissance Edmonton Airport Hotel in Edmonton. For more information on the event, please go to the Alberta Business Awards of Distinction website at www.abbusinessawards.com

Goodwill Plaza on Macleod Trail is here! This year Goodwillians are feeling excitement and gratitude after a whirlwind of store openings. While we’d never pick...

Halloween Look Book: One For The Kids

Halloween Look Book: One For The Kids We've got your Halloween costume sorted at Goodwill Alberta. If you need a quick solution, we have ready-to-wear...

To show our appreciation and as a thank you to our shoppers and donors, we are excited to offer an opportunity to save BIG at...