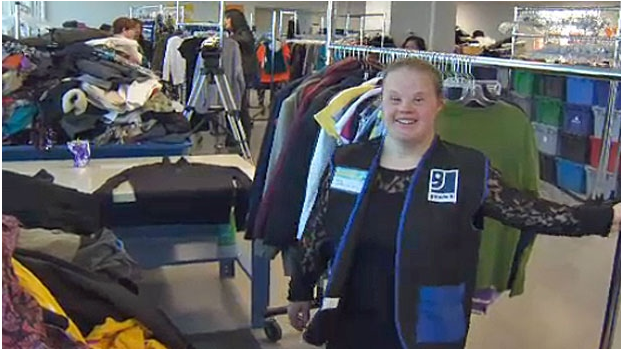 A valued team member at Goodwill Industries is showing others that work is something to smile about and is our CTV Calgary Inspiring Albertan this week.

Kelsey Wood works at the Goodwill Industries’ Chinook Store and is rarely seen without a smile.

She sorts through the donations and prepares them for the retail sales floor.

“Goodwill is a family and we work as a team,” said Kelsey.

Fay Wisted is Director of Goodwill Industries for southern Alberta and says Kelsey is very special to her.

“Kelsey is somebody that came to us three years ago and to this day, I started out as the store manager at this store, and to this day when I walk into the store I'm met with a hug and a smile every day,” said Wisted.

Kelsey was brought to CTV Calgary’s attention by Olympic curling silver medalist Cheryl Bernard who is now a spokesperson for Goodwill Industries.

Bernard says she was looking for a local non-profit organization to represent and had been leaning towards Goodwill and meeting Kelsey made the decision easier.

“She's such, got such a heart and she's somebody that we should all look at. She smiles everyday, life is really good and so I wanted to vote her for an inspired segment,” said Bernard.

Kelsey was at Bernard's side a few weeks ago when Goodwill announced that the skip would be an ambassador for the charity.

There is a good natured rivalry between the two over medals as Kelsey has been to the Special Olympics in several sports.

Bernard says the subject of the Olympics came up very soon after they met.

“She said, oh you were in the Olympics, how many medals have you won? And I went, well just one. She said, oh that's okay, I’ve won six," said Bernard.

Wisted says other employees are also inspired by Kelsey.

“A lot of our individuals that work for us are shy, they're a little bit introverted and we respect that, they do a fantastic job but Kelsey's the one that's always jumping up and speaking out, she's always the one that’ offering her, herself to do anything we need done. So I think that she is an inspiration to them,” said Wisted.

For showing us all, that work is something to smile about, Kelsey Wood is our Inspiring Albertan this week.

A brand new program that provides support and coaching to employers who would like to hire people with disabilities.

Goodwill Named one of 25 most inspiring companies

THANK YOU for making a difference!

Since 1963, Goodwill has been making a positive impact by changing lives for the better, through the power of work and the dignity of a...

This weekend, come early to 8759-51 avenue in Edmonton for our annual Art & Book Fair!